what is the function of rod and cone cells in human eye?

The retinas of our eyes have a large number of light-sensitive cells. These cells are of two types. One type of cell is cone shaped, while the other type is rod shaped. They are called cones and rods respectively. The rods respond to intensity or brightness of light, while the cones respond to colours. The cones make it possible to distinguish between different colours. Colour blindness is a defect where a person is unable to distinguish between different colours. This is because he/she has defective cone cells.

rod cell and con cells are thespecial pigments which are only present in human beings.

they gives sensatio to colors 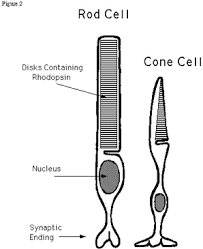 Rod cells, or rods, are photoreceptor cells in the retina of the eye that can function in less intense light than can the other type of visual photoreceptor, cone cells. Named for their cylindrical shape, rods are concentrated at the outer edges of the retina and are used inperipheral vision. On average, there are approximately 90 million rod cells in the human retina.[1] More sensitive than cone cells, rod cells are almost entirely responsible for night vision

Cone cells, or cones, are photoreceptor cells in the retina of the eye that are responsible forcolor vision; they function best in relatively bright light, as opposed to rod cells that work better in dim light. Cone cells are densely packed in the fovea, but gradually become sparser towards the periphery of the retina.

Cones are less sensitive to light than the rod cells in the retina (which support vision at low light levels), but allow the perception of colour. They are also able to perceive finer detail and more rapid changes in images, because their response times to stimuli are faster than those of rods.[4] Because humans usually have three kinds of cones with different photopsins, which have different response curves and thus respond to variation in colour in different ways, we have trichromatic vision. Being colour blind can change this, and there have been reports of people with four or more types of cones, giving them tetrachromatic vision.[5][6][7] Destruction to the cone cells from disease would result in blindness. A study involving mice injected with opsin into their retinas showed retinal activity involving light signals three months late.