i want a short answer of question as below.

Q1] How are clouds formed?

@Jaidev: You may refer to the answers provided by your friends.

@others: Good work! Keep it up.

Clouds are formed when water vapour in the air is cooled and condenses as part of the water cycle. Clouds consist of billions of tiny water droplets (and even ice crystals) floating in the sky and appear in a variety of shapes and sizes depending on how and where they formed. However, there are three main types of cloud

it means capturing rain where it falls or capturing the run off in your own village or town. And taking measures to keep that water clean by not allowing polluting activities to take place in the catchment.

Transpiration is a process similar to evaporation. It is a part of the water cycle, and it is the loss of water vapor from parts of plants (similar to sweating), especially in leaves but also in stems, flowers and roots. Leaf surfaces are dotted with openings which are collectively called stomata, and in most plants they are more numerous on the undersides of the foliage. The stomata are bordered by guard cells that open and close the pore.

The water vapour from these processes rises up, cools down in the higher atmosphere, and forms clouds by the process of condensation.

The rainwater on the roofs of the buildings is collected through canals that drain the water into ground reservoirs. This stored water is later utilized. 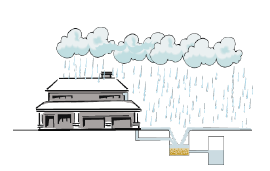 1)First, water evaporates, rises, and fills up the atmosphere. The evaporated water, a.k.a. water vapor then clings to other numerous particles or dust found in the atmosphere. This dust comes from automobiles, fires, volcanoes, bacteria, and sea spray.

As water vapor rises, it cools. Now, the lower the temperature of air, its capacity to hold water vapor (also known as the saturation point of air) also drops.

Eventually, the rising water vapor condenses and forms the structure of the cloud. You can’t however see this structure unless it has its own color. Well, we know that clouds are either white or dark, and that’s why we’re able to see them.

2)Rainwater harvesting is the accumulating and storing of rainwater for reuse before it reaches the aquifer. It has been used to provide drinking water, water for livestock, water for irrigation, as well as other typical uses. Rainwater collected from the roofs of houses and local institutions can make an important contribution to the availability of drinking water. It can supplement the subsoil water level and increase urban greenery. Water collected from the ground, sometimes from areas that are especially prepared for this purpose, is called Stormwater harvesting. In some cases, rainwater may be the only available, or economical, water source. Rainwater harvesting systems can be simple to construct from inexpensive local materials, and are potentially successful in most habitable locations. Roof rainwater may not be potable and may require treatment before consumption. As rainwater rushes from your roof it may carry pollutants, such as mercury from coal burning buildings, or bird faeces. Although some rooftop materials may produce rainwater that would be harmful to human health as drinking water, it can be useful in flushing toilets, washing clothes, watering the garden, and washing cars; these uses alone halve the amount of water used by a typical home. Household rainfall catchment systems are appropriate in areas with an average rainfall greater than 200 mm (7.9 in) per year, and no other accessible water sources (Skinner and Cotton, 1992). Overflow from rainwater harvesting tank systems can be used to refill aquifers in a process called groundwater recharge; though this is a related process, it must not be confused with rainwater harvesting.

3)Transpiration is a process similar to evaporation. It is a part of the water cycle, and it is the loss of water vapor from parts of plants (similar to sweating), especially inleaves but also in stems, flowers and roots. Leaf surfaces are dotted with openings which are collectively called stomata, and in most plants they are more numerous on the undersides of the foliage. The stomata are bordered by guard cells that open and close the pore. Leaf transpiration occurs through stomata, and can be thought of as a necessary "cost" associated with the opening of the stomata to allow the diffusion of carbon dioxide gas from the air for photosynthesis. Transpiration also cools plants, changes cell's osmotic pressure, and enables mass flow of mineral nutrients and water from roots to shoots.

3. The water comes out of the plants in a form of vapour and that process is called transpiration.