By following this procedure, we can get what is 105 degree angle. 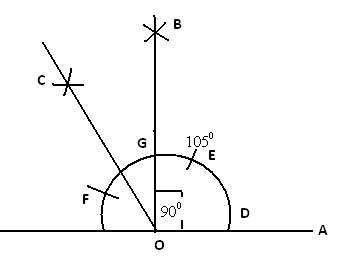 Step 2: place the needle of the compass on the point O at which the angle to be made.

Step 3: Draw an arc with simple semi circle by taking some radius such that it intersects the reference line at point D.

Step 4: Now place the compass needle at the point D and draw arc on semicircle at point E without changing radius.

Step 5: Again draw the arc on same semi circle at centre of point E by without changing radius that intersect the point F.

Step 6: Now we get point D, E and F with centre at O. Point E and point F correspond to angle 60 degree and 120 degree respectively.

Step 7: Now change the radius in compass, and draw two arcs from point E and F such that they intersect each other at point (B).

Step 10: From point G draw an arc and without changing the radius draw another arc from point F such that they intersect each other at point C.

Step 12: The line OC which makes an angle of 105 degree with the reference line OA.

The steps of construction are as follows:
(i) Take the given ray PQ. Extend PQ on opposite side of Q. Draw a semicircle of some radius
taking point P as its centre, which intersect PQ at R and W.
(ii) Taking R as centre and with the same radius as before, draw an arc intersecting the
previously drawn arc at S.
(iii)Taking S as centre and with the same radius as before, drawn an arc intersecting the arc
at T (see figure)
(iv) Taking S and T as centre, draw arc of same radius to intersect each other at U.
(v) Join PU. Let it intersect the arc at V. Now taking V and W as centre and with radius more
than  VW draw arcs to intersect each other at X. Join PX which is the required ray making
135o with the given line PQ.
Now, we can measure the angle so formed with the help of a protractor. It comes to be
135o.