How did Mendel explain that it is possible that a trait is inherited but not expressed in an organism?

Generally two copies of genes are inherited, one from each parent. One copy of the gene is expressed in the offspring and the other copy remain suppressed. For example, if a child born to a white female and black male is white, then the gene copy responsible for black colour is the suppressed one.

Mendel proved that "It is possible that a trait is inherited but not expressed in an organism". This statement can be explained with a monohybrid cross. 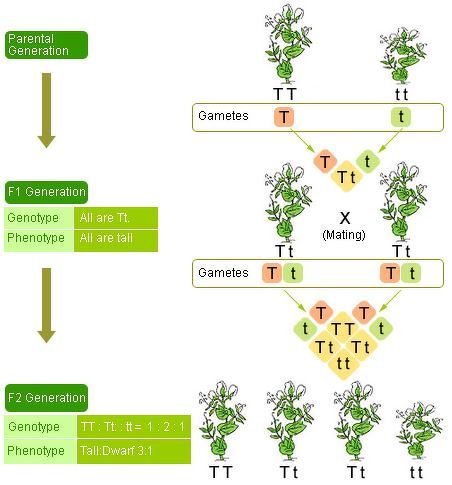 As seen in the image above, in parent generation a complete homozygous tall plant and a homozygous dwarf plant was taken and crossed. The F1 generation produced all tall plants. The dwarf character was not expressed but inherited with genotype Tt.
Then F1 was again crossed, then out of four, three plants were tall and one was dwarf. But, the genotype was different for the plants which was having tall phenotypes. This thus showed that a trait that is inherited is not expressed in an organism and it acts as a recessive trait which is suppressed by the dominant trait.