Producer’s equilibrium refers to that level of output at which producer earns maximum profits.

It can be explained by following schedule and diagram:

In the above diagram output is measured on X axis and MC and MR is measured on Y axis.
MC curve is U-shaped, MR curve is parallel to X axis because it is assumed price is constant.

MC and MR are equal at two points (A and E) but both can’t be equilibrium.
At point A (2th unit of output) producer will not be in equilibrium because after this point MC is decreasing (MC < MR), so it is profitable for the producer to go on producing more, till MC = MR.

At point E (6th unit of output) producer will be in equilibrium because at this point both the condition are satisfied. If producer will produce beyond 6thunit, his profit will decline because MC>MR

Conclusion: Producer will be in equilibrium at 4th unit of output. A firm is said to be in equilibrium when it has no inclination to expand or to contract its output. This state either reflects profit maximisation or minimize losses. A producer can attain equilibrium level under the following two situations:

As long as the cost of producing another unit remains less than the revenue received from the sale of an additional unit, a producer won’t wander away from his path of earning profits. This is because, until MR>MC, it keeps on adding to profits. Production is stopped only when MR becomes equal to MC. MR is the addition to TR from the sale of one more unit. MC is the addition to TC when an additional unit is produced. Thus when MR=MC, TR-TC becomes maximum for maximum profit. If MR exceeds MC, then the producer will continue producing as it will add to his profits. On the contrary, if MR<MC then benefit will be less than cost. In essence, MR=MC is the only possible combination among the three to represent equilibrium.

When MC is greater than MR after equilibrium, production of more units will lead a to decline in profits. MC can be equal to MR at more than one output level. In that case, if MC<MR after this level, it would not represent the equilibrium state as the producer would eye more profit. Thus MR=MC is a necessary condition but not sufficient enough. It has to be supplemented by the condition that MR should be less than MC after this level, to ensure producer’s equilibrium. 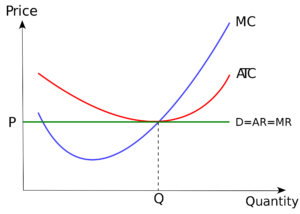 Under conditions of perfect competition, the price remains constant. We know that price is equal to AR. Further, the revenue from every additional unit is also equal to AR, when the price is constant. The AR curve coincides with the MR curve.

As explained we look for the level of output where MR becomes equal to MC (geometrically MR curve intersects with MC curve) and after this level, MC is greater than MR (geometrically the MC curve is above the MR curve after the equivalence point). When both these conditions are satisfied, the producer attains the equilibrium level of output.

Producer’s Equilibrium when Price is not Constant 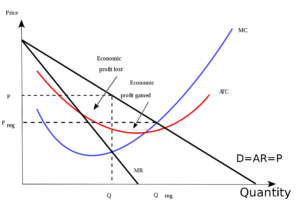 Under imperfect market conditions, the price tends to fall with an increase in output, as a producer can sell more units only at a lower price. The MR curve, in this case, slopes downwards. Producer aims to produce that level of output at which MC is equal to MR and after this level of output MC is greater than MR. This is depicted by the two curves intersecting each other and the MC curve rising above the MR curve past the intersection point.