can u xplain RHS congruence condition?

Here is the answer to your question.

hope so this help u

t us consider the two right-angled triangles, ABC and PQR, drawn below. 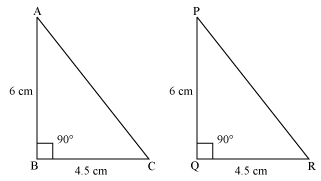 et us now discuss some more examples based on the above concept.

ΔABC and ΔLMN are two right-angled triangles. In ΔABC, ∠B = 90°,

. Examine whether the two triangles are congruent.

On the basis of the given information, the two triangles can be drawn as follows.

From ΔABC and ΔLMN, we obtain

Hence, ΔABC and ΔLMN are not congruent.

What is the value of x? 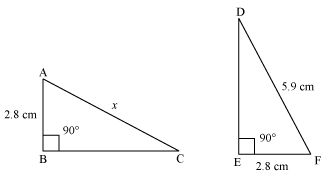 It is given that ΔABC ≅ ΔFED.

Now, we know that when two triangles are congruent, their corresponding sides are equal.

ABC is an isosceles triangle where

Is the given pair of right-angled triangles congruent? 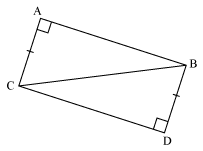 Can we say that the given triangles are congruent?

Let us find out.

Here, ∠B is the angle included between the sides

. Similarly, ∠Q is the angle included between the sides

THE FULL FORM OF RHS IS RIGHT ANGLED HYPOTENUSE SIDE.  IF TWO TRIANGLE ARE SAID TO BE CONGRUENT BY RHS CRITERION THEN IT MEANS THAT ONE ANGLE OF THAT TRIANGLE IS ON 90 DEGREE,THE HYPOTENUSE OF THE TRIANGLES ARE EQUAL AND ONE OF CORRESPONDING SIDES ARE EQUAL

Right angled hypotunus side
What are you looking for?