Ans briefly of all parts 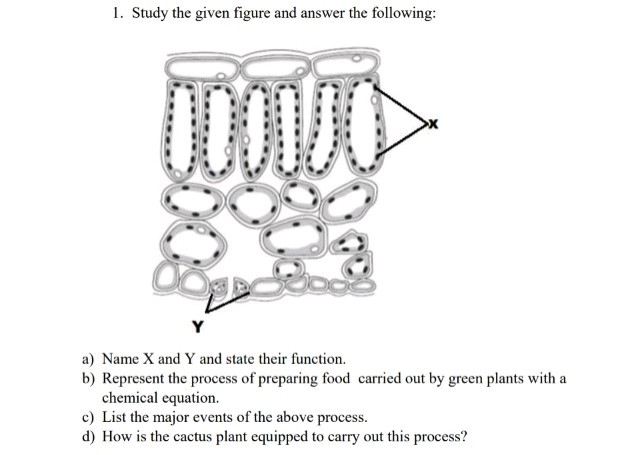 Ans a) X here is Mesophyll cells, Y is stoma. Stomata are tiny pores present mainly on the surface of leaves. They are also present on the surface of young stems and roots.Stomata consist of a stomatal opening or stoma, which is surrounded by two distinct epidermal cells known as guard cells. Mesophyll cells are the specialized cells present within a leaf, below epidermal layer.As shown in the figure below, mesophyll contains chloroplasts which are the actual sites of photosynthesis.


Ans c) The sequence of events that occur during the process of photosynthesis are:

Stomata plays an important role as the raw product of photosynthesis i.e. carbon dioxide enters the plant through stomata and oxygen which is the byproduct is also released through it.


Ans d) Cactus grows in desert environment, where there is scarcity of water. The leaves of cactus are modified into spines, to prevent water loss from the surface of leaves.