An Address for Living Beings

You know that a huge variety of living organisms exists in this world. Have you ever wondered as to how this great biodiversity came to be on Earth?

A diverse multitude of life forms surrounds us—ranging from microscopic organisms like bacteria and algae to giants like the blue whale and redwood tree. There are some living beings that differ from one another only slightly; there are others that differ to a much greater extent. It is evolution that is responsible for this diversity of plant and animal life that exists on Earth.

It is a well-known fact that life started on Earth with the simplest unicellular form and gradually developed into more and more complex forms. This happened due to the accumulation of changes in the body designs of ancient organisms. This slow change in the body design of an organism over a long period of time is termed as evolution. It helps an organism survive in its surroundings.

Is it easy to identify all living organisms one by one?

No, it’s not easy. This is the reason why we have a system of classification. Under this system, organisms are divided into groups based on their differences, and each group contains organisms with similar characteristics. Classification makes the study of the huge biodiversity easy.

Are there more reasons for classifying organisms?

Here are the reasons why we need the system of classification. Charles Darwin (1809−1882) was an English naturalist. He described the idea of evolution in 1859 in his book The Origin of Species. According to his theory about evolution, all species of life have descended over time from common ancestors.

Classification refers to the identification, naming and grouping of organisms into a formal system based on similarities in their internal and external structures or evolutionary history. It determines the methods of organizing diversity of life on Earth.

Classification helps to separate organisms into broader groups based on bigger differences. Then, within each of these groups, smaller sub-groups are decided by picking up the next set of differences.

The common names of these groups and sub-groups are kingdom, phylum, class, order, family, genus and species.

Take, for example, a dog and a lion. The two share many characteristics. For this reason, they are placed in the same kingdom, phylum, class and order. However, their similarity ends there. That is why they are further categorized into different families. 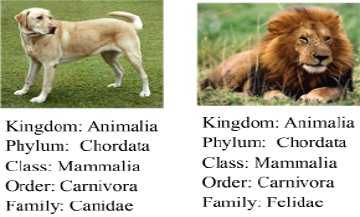 Classification allows organisms to be identified and categorized on the basis of their structures and structural functions. Accordingly, they can be described as primitive or advanced. Primitive organisms, which have simple and basic characteristics, are classified first; and then come the advanced organisms. This helps in predicting the line of evolution or evolutionary history of organisms.

The characteristic that came into existence earlier is basic. This is because it is independent of other characteristics in terms of its effe…