Consider the circle given below. 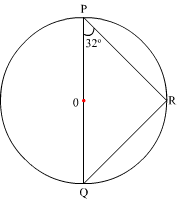 Can we find the measure of ∠PQR?

Let us try and find out.

Observe that a ΔPQR is formed inside the circle. We know that the sum of all the angles in a triangle is 180°.

Observe that ∠QRP is an angle in a semi-circle.

There is an important theorem related to angle in a semi-circle. It states that

In this manner we use the theorem related to angle in semi-circle to solve various problems.

Let us now solve a few more problems to understand this concept better.

We also know that the sides opposite to equal angles are equal. Therefore,

We know that the angle in a semi-circle is a right angle.

We are quite familiar with an important property of angles subtended by an arc at the centre and anywhere on the circle.

This property can be used to construct a variety of angles.

For example, let us construct an angle of measure

For this, we need to draw a circle of any radius, OB. 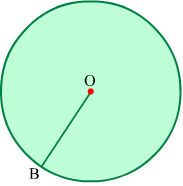 Since we need to draw an angle of measure

67° at the centre of the circle by using the property stated above.

Draw ∠BOC of measure 67° by taking BO as the base such that point C lies on the circle. 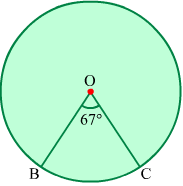 Now, take a point A anywhere on the circle on the alternate arc and join AB and AC. 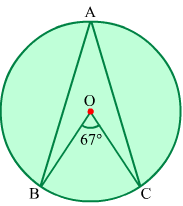 ∠BAC is the required angle of measure

The same concept can be applied for constructing a triangle when the measures of all the angles are given.

Let us understand this concept by taking an example.

For this, first we will draw a circle of radius OB = 3 cm. 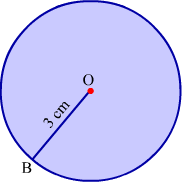