We know that plants prepare their own food, but animals eat plants and other animals for food.

What are the components of the food consumed by animals?

Carbohydrates, fats, proteins, minerals, and vitamins are the components of the food consumed by animals. However, some components of food are complex and cannot be utilized by the body of an animal in that form. Then, how do animals utilize these components?

Consumers: These organisms mainly obtain food either directly from autotrophs or indirectly from other heterotrophs. They include animals that generally ingest and then digest their food.

Consumers are divided into herbivores, carnivores, and omnivores.

Decomposers: This group includes micro-organisms such as bacteria and fungi, which obtain nutrients by breaking down the remains of dead plants and animals.

Do you know consumers can be further classified as

Each organ is placed at a different position in the alimentary canal. Hence, each organ performs a different function.

Let us recall the functions of digestive organs and relate them to the process of digestion. 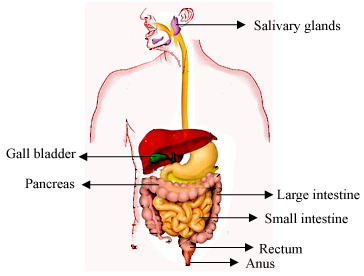 The process of digestion occurs in five distinct steps. These are as follows.

1.Ingestion: The process of taking in food through the buccal cavity is known as ingestion.

2.Digestion: It is the process of breaking down food into simpler substances.

3.Absorption: The process of absorption takes place in the small intestine. Here, the digested food is absorbed in the blood through the villi, which are finger-like projections.

4.Assimilation: The food absorbed by blood is transported to various parts of the body by blood vessels. This process is known as assimilation.

5.Egestion: The process of removing the undigested food material from the body through the anus is known as egestion.

Process of Digestion of Food

Absorption of the digested nutrients is mainly carried out by large intestine.

In the small intestine, the digestion of proteins, fats, and carbohydrates is completed.

Thereafter, the digested nutrients are absorbed by the finger-like projections present in the small intestine called villi. Villi have a higher surface area for absorption and they constantly move back and forth in a wave-like motion. Villi contain numerous small blood capillaries where the nutrients are absorbed in the blood.

Faeces enter rectum and are stored here. The faeces are eliminated through the anus at regular intervals. This is the fate …