∴ Force on the charge,

This force is called Lorentz force.

A − Cross-sectional area of the rod

l − Length of the rod

I − Current in the rod

Force on the carriers,

l is the vector magnitude of length of the rod

The magnetic effect of current was first discovered by H.C. Oersted. He observed that the flow of charges in a conductor produces magnetic effect around it. He demostrated this phenomenon using the experimental set-up shown below. 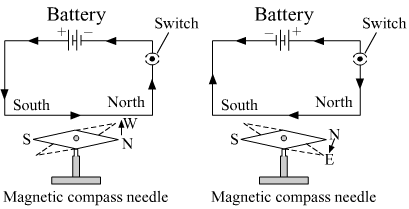 When the current in the circuit was anticlockwise, the magnetic needle was found to deflect towards West. The needle deflected towards East when the direction of current was reversed. This experiment proved that current has magnetic effect associated with it.

I = Current in the conductor

dl = Infinitesimal element of the conductor

r = Distance of point P from the element

Magnetic field on the axis of a circular current loop 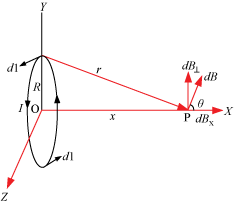 I = Current in the loop

R = Radius of the loop

X-axis = Axis of the loop

X = Distance between O and P

dl = Conducting element of the loop

v and B are at right angles