Then, how do plants respond to stimuli?

Have you ever seen any movement in plants?

In the second example, the seed germinates and shows directional movement.

In the first example, movement is independent of growth i.e. there is no growth involved. However, in the second example, the movement of the seedling is caused by growth. If the seedling is prevented from growing, then it will not show any movement.

In plants (like animals), the information is carried from cells by electro-chemical means. However, there is no specialized tissue for the conduction of information. In fact, plants change their shape by changing the amount of water in them. This results in swelling and shrinking. This change of shape results in movement.

You must have seen plants such as peas and grapes with tendrils. Movement in these plants occurs in the growing stem of the tendrils. When the tendrils come in contact with a supporting object, they coil and cling around it. Plants respond to stimuli slowly by growing in a particular direction. This type of growth is directional.

For example, the movement of organs like leaves and petals that are directed by the touch as in the leaflets of touch me not plant, wherein the plant droops when touched from any side.
The various kinds of nastic movements shown by plants are:

Thigmonasty:
It is the movement of a plant in reponse to an external stimuli like touch, vibration etc. For example, Mimosa plant responds by "folding up of leaves" when touched. The sensitive part of the plant involved in this type of movement is called pulvinus which is a soft, swollen structure present at the base of the leaf.

Photonasty:
Some plants show movement in plant part in response to the light. For example, flowers of sunflower and lotus open in morning.

We salivate when we see delicious food; we feel tense or anxious while making important decisions; we digest different types of food that we ingest; children grow taller during the early years of their life; voices of boys crack during puberty; lactation begins during motherhood. Do you know why these changes occur? How does the body control these functions? Is there another system governing these complex functions? Let us explore.

A hormone is a chemical messenger that regulates physiological processes in living organisms. It is secreted by a gland.

A cell, tissue, or an organ that secretes hormones required for a specific function is called a gland. You are familiar with the pancreas, pituitary gland, and thyroid gland. Glands are mainly divided into two broad categories -endocrine and exocrine.

Do you know that the term ‘hormone’ was first introduced by Ernest Starling? Secretin was the first hormone to be discovered. Ernest Starling and William Bayliss are credited for its discovery.

We have often heard people complaining that they suffer from sugar. Do you know which condition they are referring to? How do we treat this condition?

They are referring to the condition called diabetes. It is a chronic condition characterized by high levels of sugar (glucose) in the blood.

What is the reason for the increase of sugar in the blood? How are other activities such as sleep, hunger, stress, body temperature etc. regulated? Let us explore.

Hormones in the human body

There are different kinds of hormones found in the human body. However, we will discuss only a few. 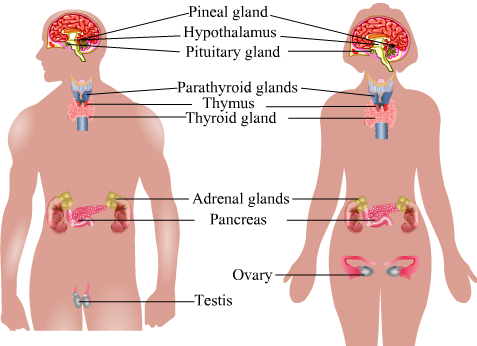 Functions of the pituitary Gland

The secretion of the growth hormone should be properly maintained in the body. Over secretion of the growth hormone prior to puberty (in children) results in abnormal growth of the body known as gigantism. This is characterised by the excessive growth and increase in height of the person. On the other hand, its low secretion results in retarded growth and this condition is called dwarfism.