what is the meaning of ' zero cost monopoly' ?

The price and output decisions of a monopolist under such a situation are explained with the help of the following diagram. 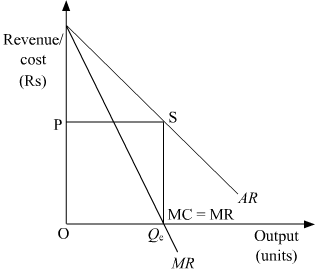 A monopoly (from Greek monos μόνος (alone or single) + polein πωλεῖν (to sell)) exists when a specific person or enterprise is the only supplier of a particular commodity (this contrasts with a monopsony which relates to a single entity's control of a market to purchase a good or service, and with oligopoly which consists of a few entities dominating an industry).[1] Monopolies are thus characterized by a lack of economic competition to produce the good or service and a lack of viable substitute goods.[2] The verb "monopolize" refers to the process by which a company gains the ability to raise prices or exclude competitors. In economics, a monopoly is a single seller. In law, a monopoly is a business entity that has significant market power, that is, the power, to charge high prices.[3] Although monopolies may be big businesses, size is not a characteristic of a monopoly. A small business may still have the power to raise prices in a small industry (or market).[4]

A monopoly is distinguished from a monopsony, in which there is only one buyer of a product or service; a monopoly may also have monopsony control of a sector of a market. Likewise, a monopoly should be distinguished from a cartel (a form of oligopoly), in which several providers act together to coordinate services, prices or sale of goods. Monopolies, monopsonies and oligopolies are all situations such that one or a few of the entities have market power and therefore interact with their customers (monopoly), suppliers (monopsony) and the other companies (oligopoly) in ways that leave market interactions distorted.

When not coerced legally to do otherwise, monopolies typically maximize their profit by producing fewer goods and selling them at higher prices than would be the case for perfect competition.

Monopolies can be established by a government, form naturally, or form by integration.

In many jurisdictions, competition laws restrict monopolies. Holding a dominant position or a monopoly of a market is not illegal in itself, however certain categories of behavior can, when a business is dominant, be considered abusive and therefore incur legal sanctions. A government-granted monopoly or legal monopoly, by contrast, is sanctioned by the state, often to provide an incentive to invest in a risky venture or enrich a domestic interest group. Patents, copyright, and trademarks are sometimes used as examples of government granted monopolies, but they rarely provide market power. The government may also reserve the venture for itself, thus forming a government monopoly 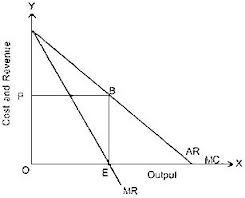