What is Law of equi marginal utility?

Lawof Equi-Marginal Utilitystates that a consumer allocates his expenditure on various commodities in such a manner that the utility derived from each additional unit of the rupee spent on each of the commodities is equal. Algebraically, this is represented the following equality.

Let us understand the concept of Consumer's Equilibrium in case of two commodities with the help of the following numerical example. Let us suppose that for a consumer the Marginal Utility of Money (MUm) is 5 utils and the price of commodityx(Px) is Rs 5, while, the price of another commodityy, (Py) is also Rs 5

, which in turn is equal to the Marginal Utility of Money (MUm).

Diagrammatically, the consumer's equilibrium in case of two commodities is represented as: 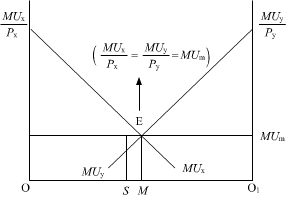 In the above figure, OO1represents the total income of a consumer.MUxandMUyrepresent the Marginal Utility curves of commodityxand commodityy, respectively. The pointErepresents the point of consumer's equilibrium, where:

Thus, the consumer would increase his consumption of commodityxtill the equality is achieved. That is, in other words, when he reaches pointE, where the equilibrium is restored by the equality between the marginal Utilities of each commodities.