an equinox is the day,when the midday sun shines vertically overhaead at the equator and the length of the day and night is of equal duration throughout the world. THe word `equinox` stands for equal nights.

on 21ST  and 23RD september, direct rays falls on the equator. at this position,neither of the poles are tilted towards the sun. so the whole earth experiances equal days and equal nights

Some astronomical coordinates—e.g., right ascension and celestial longitude—are measured from the vernal equinox. .

on 21st march the direct sun raise falls on the equator at that time niether of the poles then the whole experiences equal days and nights and this called an equinox.PLEASE NOTE IT DOWN IT WILL HELP YOU.

An equinox occurs twice a year (around 20 March and 22 September), when the tilt of the Earth's axis is inclined neither away from nor towards the Sun, the center of the Sun being in the same plane as the Earth'sequator. The term equinox can also be used in a broader sense, meaning the date when such a passage happens. The name "equinox" is derived from the Latin aequus (equal) and nox (night), because around the equinox, the night and day have approximately equal length.

The equinoxes are also the only times when the terminator is inclined 90° to the Earth's Equator (while at solstices, that inclination reaches its minimum of 66.5°, corresponding to 90° minus Earth's axial tilt).[2]

Another meaning of equinox is the date at which day and night are of equal length.[3] Because times of sunset and sunrise, unlike the phenomenon described in preceding paragraphs, vary with an observer's geographic location (longitude and latitude), these dates likewise depend on location and do not exist for locations sufficiently close to the Equator. To avoid this ambiguity, the term equilux is sometimes used in this sense. 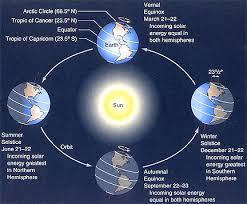 equinox means equal measurment of days and night. what happens in this day that the ray of the sun falls directly on the equator and then it is caused only on two days

On 21st March and september 23rd the direst rays of the sun falls on the equator . The whole earth experiences equal days and equal nights  because neither of the poles is tilted towards the sun . This is called equinox .

On 21st March and september 23rd the direst rays of the sun falls on the equator . The whole earth experiences equal days and equal nights because neither of the poles is tilted towards the sun . This is called equinox .

Anequinoxis a day when the sun is in itszenithover theEquator, and the Earth experiences days and nights of generally equal length. There are two equinoxes in a year: around March 21 and around Sept. 22.In theNorthern Hemisphere, March 21 is the spring orvernal equinox. September 22 is the autumnal equinox. Many people are starting to use the terms March equinox and September equinox, instead of vernal, which means spring, and autumnal, which means autumn or fall. March and September are spring and fall in the Northern Hemisphere, but it's the opposite in theSouthern Hemisphere. The Southern Hemispheres spring equinox takes place in autumn.Equinoxes are the only times of the year when thesubsolar pointis directly on the Equator. The subsolar point is an area where the sun's rays shineperpendicularto the Earth's surface—aright angle. Only during an equinox is the Earth's 23.5-degreeaxisnot tilting toward or away from the sun: the center of the sun is in the sameplaneas the Equator.Mostplanets experience equinoxes. On thegas giantSaturn, equinoxes are particularly dramatic. Saturn's spectacular ring system extends along the same plane as the planet's equator. Although the rings extend thousands of kilometers into space, they are actually very thin, only about a kilometer wide. During Saturn's equinoxes, the rings (and Saturn's equator) line up perfectly with the sun. Photos taken from the solar perspective reveal the rings as a razor-thin line.

Hope it was imformative.

An equinox occurs twice in a year around 20 march and 22 september when the plane of the earths equator passes the center of the sun.