QUestion:
{Please don't provide any web link or certified answer for the below question. Please provide only experts answer. Answer the following with the help of diagram and examples.
Explain the optical illusion in Maths for making a working model on it.​

Hi,
Optical illusions are pictures that play tricks on our eyes and baffle our perception. They are not the result of faulty vision. Depending on light, viewing angle, or the way the picture is drawn, we may see things that aren't there – and often don't see what's right under our nose. These tricks of the eye and mind have been part of human experience since the beginning of history. The ancient Greeks made use of optical illusions to perfect the appearance of their great temples. In the Middle Ages, misplaced perspective was occasionally incorporated into paintings for practical reasons. In more recent times, many more illusions have been created and implemented in the graphic arts.

In mathematics optical illusion covers  3- Dimentional part where images appears to be in three dimension although drawn in 2- dimentional paper sheet.
For example;-
A cube and a prism

Now here we can see that it appears they are occupying the space , or having volume , or in easy words appears to be in three dimension.

Donald D. Hoffman ​uses mathematical concepts to try to explain how our brains construct the images we see. He calls them rules.

The "optical illusion" where this can be seen is the devil's triangle or impossible triangle. 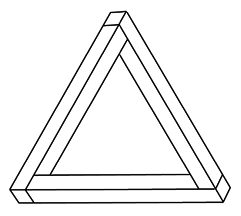 This is two sticks lying an a table and the third stick, on the right, standing vertically. Now move your head to the right until the top end of the vertical stick coincides with the far end of the stick on the table. What you see is the impossible triangle.