Pls solve n send asap
Q.10. The following curve is obtained when  is plotted against the square root of concentration for two electrolytes A and B. 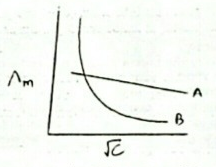 
regards
View Full Answer
What are you looking for?