In nuclear power plants how energy is produced?(5)

Experts please explain this in detailed
Thank you

Nuclear energy is generated for use in a nuclear reactor.


A nuclear reactor is a device to harness nuclear energy (fission energy) in a controlled and economical way. The energy produced is used to generate electricity and to power ships.
Uranium is used as a fuel in a nuclear reactor. 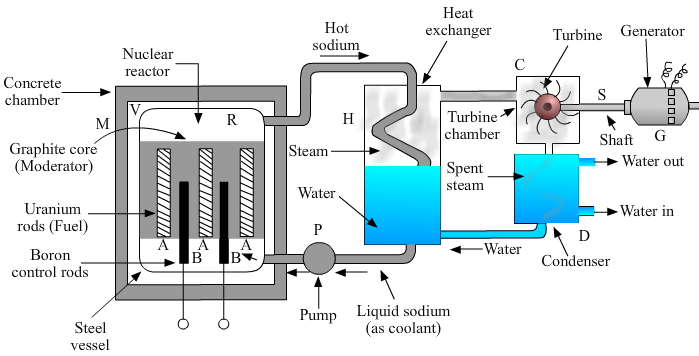 In a nuclear power plant, the fission of U-235 is carried out in a steel vessel (V) of the reactor. Enriched uranium rods (A) are inserted in a graphite core. Here, graphite acts as a moderator that slows down the speed of neutrons. Boron rods (B) are inserted between the uranium rods. These boron rods control the fission reaction. The controlled fission of U-235 produces a large amount of heat energy. Liquid sodium is pumped continuously through the pipes embedded in the reactor, and it absorbs the heat produced in the reactor. The extremely hot sodium is then passed into the coil of a heat exchanger (H) containing water. The water absorbs the heat from the sodium and boils to form steam. The steam thus formed at high pressure is introduced into a turbine chamber (C) with a turbine (T). The turbine rotates because of the pressure of the steam and drives the generator to produce electricity.

In case of an emergency, the control rods are fully inserted in the reactor. They absorb all the neutrons, shutting down the reactor.


View Full Answer
What are you looking for?