How the water can produce HYDRO ELECTRICITY ?

Kindly refer to the link given below for an answer to a  similar query :
https://www.meritnation.com/ask-answer/question/please-can-you-explain-how-hydroelectricity-is-generated/work-and-energy/471375
View Full Answer

The water is used only to rotate the turbine. Due to which elctricity is generated.

the potential energy of water is converted into kinetic energy of moving water...!! the water comes with such force that it makes turbine 2 rotate & thus produce electricity...

Hydroelectricity or hydroelectric power is the electricity obtained by harnessing the power of water flowing down from a high level. It is a timeless and renewable resource.

Water, usually stored in dams, is led down through large pipes or tunnels to lower levels, and in the course of the fall, the water rotates turbines. The mechanical energy produced is converted to electricity by the generators connected to it. The structure that houses the turbines and generators is called the powerhouse.

Transformers change the alternating current produced by the generators into current of very high voltage for easy transmission through long distances. 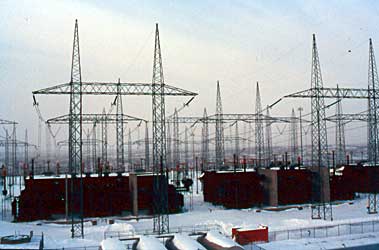 Hydropower is one of the three principal sources of energy used to generate electricity, the other two being fossil fuels and nuclear fuels. Hydroelectricity has certain advantages over these other sources: it is continually renewable thanks to the recurring nature of the water cycle, and causes no pollution. Also, it is one of the cheapest sources of electrical energy.

The Itaipú Dam between Brazil and Paraguay, which  is 190 metres high and generates more than 12,600 MW,  is the largest hydropower dam in the world. (The 185-metre Three Gorges Dam, now being constructed in China on the upper Yangtze River, would take its place by 2009, producing 18,200 MW of  power ). The Grand Coulee Dam, located near Spokane, Washington, is the largest hydropower dam in the United States, producing 6,480 MW. The Rogun Dam, in Russia, the tallest in the world, is 335 metres high. The Oroville dam, located in California, the tallest in the United States, is 235 metres high. Idukki dam in India is Asia's first and largest archdam.

the water is poured from great height so the turbine moves and the magnets at the end of turbine also move so the electrons are produced which are attracted by copper and then the energy is taken from copper aand energy is made.

Welcome to my third web page on renewable energy sources!

In the few minutes it will take you to read this page, you will be covering: 75% of our planet's surface, the substance in your drinking glass, and the element from which you are mostly made.  I hope it doesn't take you too long to figure out that this substance is water.  Our planet's water supply has transformed a barren planet into the green and blue object astronauts have spent hours staring at in awe.  Water has provided for our needs in many ways, and may easily do it again.  This time water is providing the electricity that our modern-day society greatly depends on.

The first question is, "How can we use water to create electricity?"  There are four main ways in which we use water to create electricity.  The first way is by harnessing the power of moving water in large rivers.  By building a dam in a selected area, you can create a large reservoir of water with a great deal of pressure.  Holes in the side of the dam lead to turbines, which spin as a controlled amount of water exits the dam. (Back to the Generating of Electricity)

The second way we use water to create electricity

is by the changing of tides.  Tidal power plants are producing electricity for their nearby consumers in France, Canada, Japan and many other countries.  Tidal power plants work on the power of changing tides.  The first step in the construction of a tidal power plant is in finding a bay with a large difference between it's low and high tides.  Engineers then design a dam to put across the outer end of the bay.  When high tide comes to the area, huge quantities of water come rushing into the bay.  The gates in the dam will shut when the water level has reached it's maximum height.  At low tide, the water in the bay is trapped higher than the ocean water.  Holes in the bottom of the dam let the water rush past turbines and then back into the ocean.  When the next high tide comes around, the whole process begins over again. (Back to the Generating of Electricity)

Last, and currently least, is our fourth way of creating hydroelectricity.  This method works by taking advantage of thermal differences in ocean water.  Although they are still in the experimental stages, Ocean Thermal Energy Conversion (OTEC) systems seem to have made a promising start.  Due to the smaller differences in water temperatures compared to steam-based systems, estimates say that OTEC plants will require approximately 5,000 cubic feet per second of ocean water in order to provide enough energy for 200,000 people.  Though this may seem like an incredible amount of water, it averages out to be 1.5 cubic feet per minute for one person.

Most electric power producing systems have a downside, and these are no exceptions. River-based hydroelectric dams have been known to upset the natural wildlife in their region. In times of drought, these dams will hold back the smaller amount of water coming down the river, compounding problems downstream. Tidal-based hydroelectric plants can cause widespread wildlife problems, as the regular intervals between high and low tides become disrupted. Cases have also been reported where harbors near tidal power plants completely dry up during low tide because there is an even lower amount of ocean water in the area. This can leave boats stranded on land until high tide comes in again.

Well, we got that over with. Now for the good news: Hydroelectric power plants produce no pollution; the smaller amounts of required labor and the fact that the water is free lead to a much lower electric bill; hydroelectricity can be produced 24 hours-a-day, and most important is hydroelectriciy's large amount of room for expansion. Estimates say that our planet's hydroelectric capability is greater than our entire oil supply. Hydroelectric power has a great demand and a very bright future.

how to current produce sait water