 The Making of New Delhi
 After defeating the Marathas in 1803, the British gained control of Delhi.
 The city developed only when Delhi became the capital of British India in 1911.
 Demolishing a Past
 In the first half of the nineteenth century in Delhi, the British lived with wealthy Indians in the Walled City.
 The Delhi College was established in 1792. This led to a great intellectual flowering in science and humanity. The period from 1830 to 1857 was referred to as the period of Delhi Renaissance.
 After the revolt of 1857, everything changed.
 The British wanted the people of Delhi to forget about their Mughal past.
 For security reasons, they got rid of the gardens, mosques and pavilions which surrounded the Fort.
 One-third of the city was demolished and the canals were filled up.
 When the western walls of Shahjahanabad were broken for the railways and expansion, the British shifted to the sprawling Civil Lines area away from the Indians in the Walled City.

 It took 20 years for building the city of New Delhi. The main idea was to build a city that was in stark contrast to Shahjahanabad.
 In contrast to the chaos of the Old Delhi, the architects wanted New Delhi to represent a sense of law and order. It had to be clean and hygienic and free from diseases.

The Old City of Delhi was constructed as a walled city with 14 gates, adjoining a fort-palace complex, with the river Jamuna flowing near it. The city was characterised by mosques, havelis, crowdedmohallas, narrow and winding lanes and bylanes and water channels. The British gained control of Delhi in 1803. Before the revolt of 1857, the British adjusted themselves to the Mughal culture of the Old City by living in the Walled City, enjoying Urdu/Persian culture and poetry, and participating in local festivals. The Delhi College was established in 1792, which led to a great intellectual flowering in the sciences as well as the humanities.

However, after the revolt, they embarked on a mission to rid the city of its Mughal past. They razed several palaces, closed down gardens and built barracks for troops in their place. For security reasons, the area around the Red Fort was completely cleared of gardens, pavilions and mosques. Mosques in particular were either destroyed or put to other uses. No worship was allowed in the Jama Masjid for five years. One-third of the city was demolished, and its canals were filled up. In the 1870s, the Western walls of Shahjahanabad were broken to establish the railway and to allow the city to expand beyond the walls. The sprawling Civil Lines area came up in the North of the city. This was the place where the British began living. The Delhi College was turned into a school, and shut down in 1877. The British constructed a new city, known as New Delhi, South of the Old City. Built as a complete contrast to the Old City, New Delhi became the centre of power. The Old City, meanwhile, was pushed into neglect. 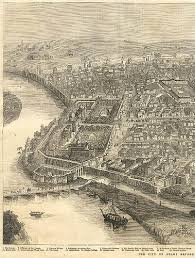 Hey you have copied it from the meritnaton's answer.

* The area around the fort was completely cleared of gardens, pavillions and mosque.

*Mosque in particular were either destroyed or put to other use.For instance the Zinat al masjid was converted into a bakery.

*One third of the city was demolished and its canals were filled up.

*In the 1870's the western walls of shah jahanabad were broken to establish the railway and to allow the city to expand beyond the walls.

*The Delhi college was earlier turned into a school and later shutdown in 1877.