Give the construction and woking of sinple dry cell?

The dry cell is compact form of Leclanche cell. It consists of a zinc container which acts as anode and the cathode is a carbon rod surrounded by powdered manganese dioxide and carbon kept in a porous container. The space between electrodes is filled by a moist paste of ammonium chloride and zinc chloride. The cylinder is sealed at the top with a pitch.

The dry cell has a potential of nearly 1.5 V. 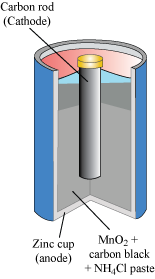 For more information you can also refer to your friends answer.

Dry cells are the types of chemical cells or batteries which are used to store electricity.They are known as dry cells because the chemical present in them is not wet but they are in the form of a paste.

They are used as batteries in toys, clocks, flash lights, calculators and many household appliances.

a cell is a convenient source of electrical energy.

it has apaste of ammmonium chloride inside a zinc container.