We know, a consumer always aims at maximising his/her utility or satisfaction level. A rational consumer, with well defined preferences, will always choose the best bundle among all the bundles available to him, given his/her money income and the prices of the goods and services. In other words, a consumer always tries to attain the highest possibleICgiven his/her budget set.

A consumer attainsequilibrium at the point where the budget line is tangent to the indifference curve. This optimum point is characterised by the following equality.

Graphically, the equilibrium can be depicted as follows. 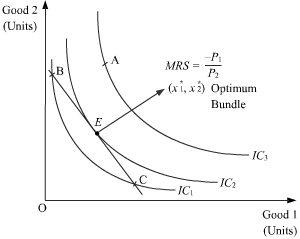 In the figure given above, pointEdepicts consumer equilibrium. At this point, the budget line is tangent to the indifference curve. Observe that at this point the consumer's willingness to purchase (as given by the indifference curve) coincides with what the consumer can actually purchase (as given by the budget line). The optimum bundle is denoted by (x1*,x2*). This point is the optimum or the best possible point.

It should be noted that all other points lying on the budget line (such as pointBand pointC) are inferior to (x1*x2*) as they lie on a lowerIC. Thus, the consumer can rearrange his consumption and again reach equilibrium where the marginal rate of substitution is equal to the price ratio.

For example, at pointB, MRS is greater than the price ratio (i.e.

). In this case, the consumer would tend to

move towards pointEby giving up some amount of good 2 to increase the consumption of good 1.

Similarly, at pointC, MRS is less than price ratio (i.e.

). In this case the consumer would tend to move towards pointEby giving up some amount of good 1 to increase the consumption of good 2.