features of democracy are-

Manasa B answered this

1. having right to vote for each and every member above 18 years

2.decisions should be taken by people

4.right to express their opiniona and views

5.equal opportunities for employment to all

Features of Democracy are:-
1) It provides us with equal rights such as right to vote and right to education.
2) It is better than any other form of government because it is accountable.
3) It improves its mistake.
4) Decisions are taken by the representatives which are being elected by we citizens.
5) Yes, there is a delay in the decisions taken by government but soon or far the decisions are taken in favour of the those who are deservers and are in the path of truth, loyality and honesty

1.Leaders are elected by the people (adult franchise ) 2.There are three main parts of democracy and they are legislative, judiciary and executive. 3.elected representative passes laws. 4.it's the right of public that they can remove their representatives if there representatives are not right in most of the decisions.

A. S. Anandakrishnan answered this

universal adult franchise
all the people are equal before the law

Some features of democracy -

Majority Rule– the system of government is based on parliamentry majorities

Representative Elections-the people are allowed to elect represtatives to speak for their views and interests.

Multi party system-voters have the opportunity to choose from a variety of political parties, represting a wide range of political opinion.

Freedom of speech-no restriction is placed on the right to opinions and express then openly.

Freedom of Assembly-no restriction is placed on the right to hold meetings or organise demonstrations provided those do not violate  the rights of others.

Respect the individual rights-the state protects individuals whose rights are threatened by the actions of others.

Respect for Minority rights-minorities should not have their basic rights violated by the majority.

Respect for the Law-citizens who are given democratic rights should obey the laws that provide these rights.

Respect for Democratic Procedures-individuals or groups who have grievances against the system should operate within it, seeking to change the law through legal means.

Channels of Influence-individuals and groups have channels of access to decision makers at every level.

1.in a democracy the final decision making power with those elected by people

2.democracy must be based on fair and free election.

3.in a democracy each citizens have equal right to vote.

4.in a democracy. if people r not happy with tthe gornment.. they have to change...... the govrt. 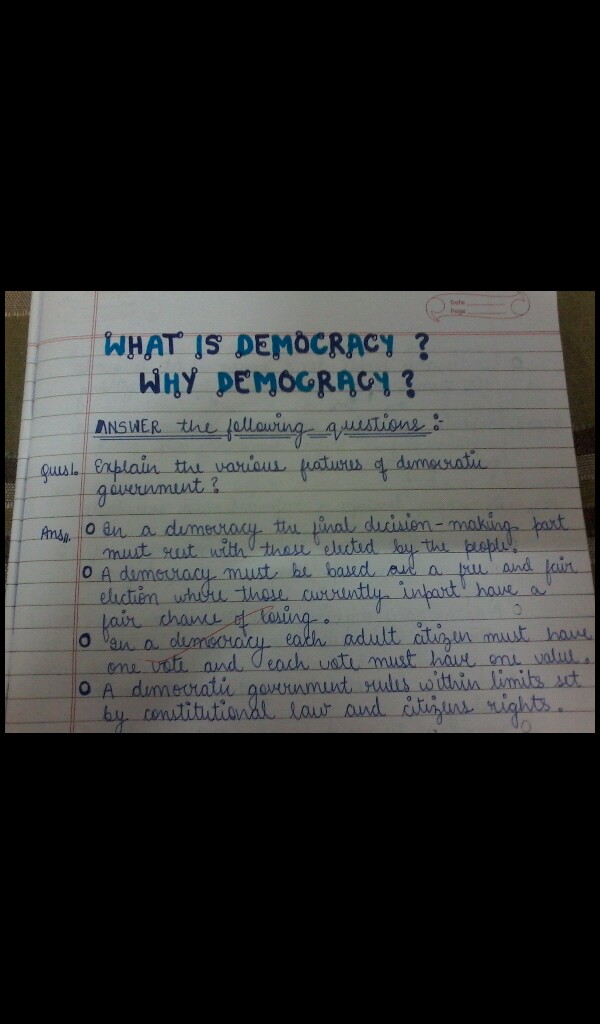 Three features of democratic election
What are you looking for?