Gravitation, or gravity, is a natural phenomenon by which physical bodies attract each other with a force proportional to their masses. Gravitation is most familiar as the agent that gives weight to objects with mass and causes them to fall to the ground when dropped. Gravitation causes dispersed matter to coalesce, and coalesced matter to remain intact, thus accounting for the existence of planets, stars, galaxies and most of the macroscopic objects in the universe.

Gravitation is responsible for keeping the Earth and the other planets in their orbits around the Sun; for keeping the Moon in its orbit around the Earth; for the formation of tides; for natural convection, by which fluid flow occurs under the influence of a density gradient and gravity; for heating the interiors of forming stars and planets to very high temperatures; and for various other phenomena observed on Earth and throughout the universe.

Gravitation is one of the four fundamental interactions of nature, along with electromagnetism, and the nuclear strong force and weak force. Modern physics describes the phenomenon using the general theory of relativity by Einstein, in which it is a consequence of the curvature of spacetime governing the motion of inertial objects. The simpler Newton's law of universal gravitation provides an accurate approximation for most physical situations. 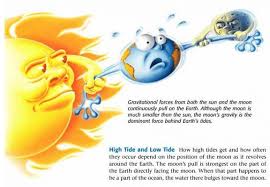 Newton's law of universal gravitation states that every point mass in the universe attracts every other point mass with a force that is directly proportional to the product of their masses and inversely proportional to the square of the distance between them. (Separately it was shown that large spherically symmetrical masses attract and are attracted as if all their mass were concentrated at their centers.) This is a general physical law derived from empirical observations by what Newton called induction.[2] It is a part of classical mechanics and was formulated in Newton's work Philosophiæ Naturalis Principia Mathematica ("the Principia"), first published on 5 July 1687. (When Newton's book was presented in 1686 to the Royal Society,Robert Hooke made a claim that Newton had obtained the inverse square law from him – see History section below.) In modern language, the law states the following:

It is force exerted by the earth on any object .  or the force due to acceleration of earth on the object . its value is