All of these questions 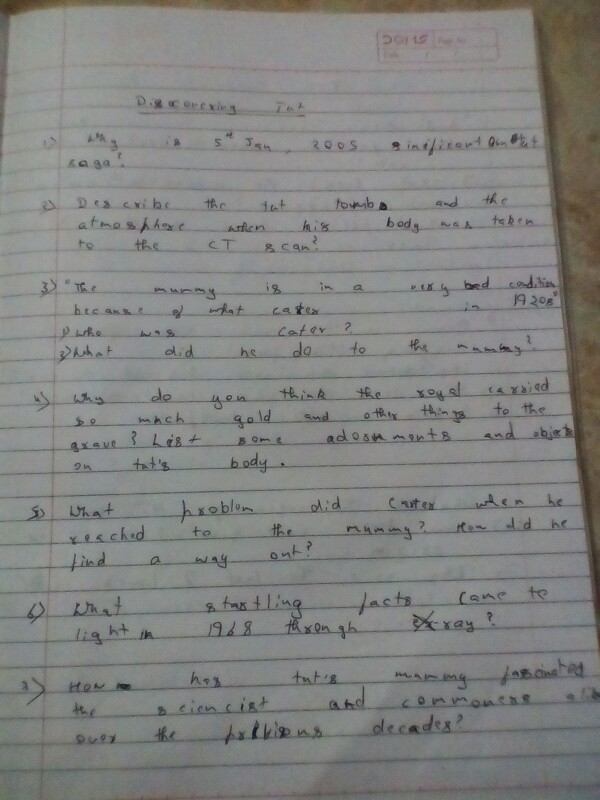 2) King Tut's mummy was in pretty bad condition. However, his tomb was surprisingly complete. Howard found an extremely rich collection of the pharaoh's royal possessions. It had huge artefact of gold. The tomb also had many other things like board games. a bronze razor, linen undergarments, cases of food and wine. This was so because they believed that he would be needing all this in the life he would live after his death.
Nature echoed the unnatural happening with King Tut. The whole of nature seemed to protest the unnatural death of king tut. Angry winds stirred up around the group of archaeologists when they took out the body of King Tut for CT scan. They wanted to ascertain the cause of King Tut’s death. The dust appeared devilish and to the narrator it was as if a warning to stop their work and gave presentiment of something evil that was about to come. Nature reflected the microcosm of the occurrences with Tut.

3) Zahi Hawass blamed Howard Carter for what he did in the 1920s for the bad condition in which Tut's mummy was found. Carter was the British archaeologist who in 1922 discovered Tut's tomb after years of futile searching. However,its contents were hastily ransacked. It was the richest royal collection ever found and became part of the pharaoh's legend. Carter encountered a problem when he reached the mummy, the ritual resins had hardened cementing Tut to the bottom of his solid gold coffin and no amount of legitimate force could move them. Since the Egyptian sun could beat down like a hammer in the far south of Egypt, Carter decided to leave the mummy out in the blazing sunshine to loosen the resins but to no avail. So he had chisel away the consolidated material from beneath the limbs and the trunk before it was possible to raise the king's remains. This was required otherwise thieves would have run off with the riches. Carter's men, in order to separate Tut from his adornments, removed the mummy's head and severed nearly every major joint. Once they had finished, they reassembled the remains on a layer of sand in a wooden box with padding to conceal the damage done.

We hope that you find these answers helpful. Kindly ask the other questions in a separate thread.
Regards.