A diploid organism is heterozygous for 4 loci, how many types of gametes can be produced?

Locus is a fixed position on a chromosome, which is occupied by a single or more genes. Heterozygous organisms contain different alleles for an allelic pair. Hence, a diploid organism, which is heterozygous at four loci, will have four different contrasting characters at four different loci.

For example, if an organism is heterozygous at four loci with four characters, say Aa, Bb, Cc, Dd, then during meiosis, it will segregate to form 8 separate gametes. 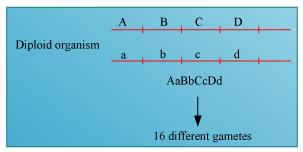 If the genes are not linked, then the diploid organism will produce 16 different gametes. However, if the genes are linked, the gametes will reduce their number as the genes might be linked and the linked genes will be inherited together during the process of meiosis.